How does Campbell County Local Government use the 1% Tax

How does Campbell County Local Government use the 1% sales tax (aka Penny Power)?

For fiscal years 2015-18, the projects with more than 56% of the funds go to solid waste operations and County road maintenance and pavement management! Check out what else there is to know about these funds:

For the County, its largest 1% optional sales tax expenditure is landfill remediation, which is not optional. If the 1% was not available for these costs, and it was budgeted out of the general fund, tipping fees would have to be increased exponentially for every household in Campbell County. Currently, the general fund landfill budget is 2.2 million dollars. Over the last four years, an average of an additional 2.3 million dollars annually in 1% funds has been budgeted to support landfill equipment and remediation needs. Without the 1% funding to assist in these costs, the general fund would need to be able to cover approximately 4.5 million dollars annually just for landfill related costs. Without it, residents would be paying a lot more to use the landfill. 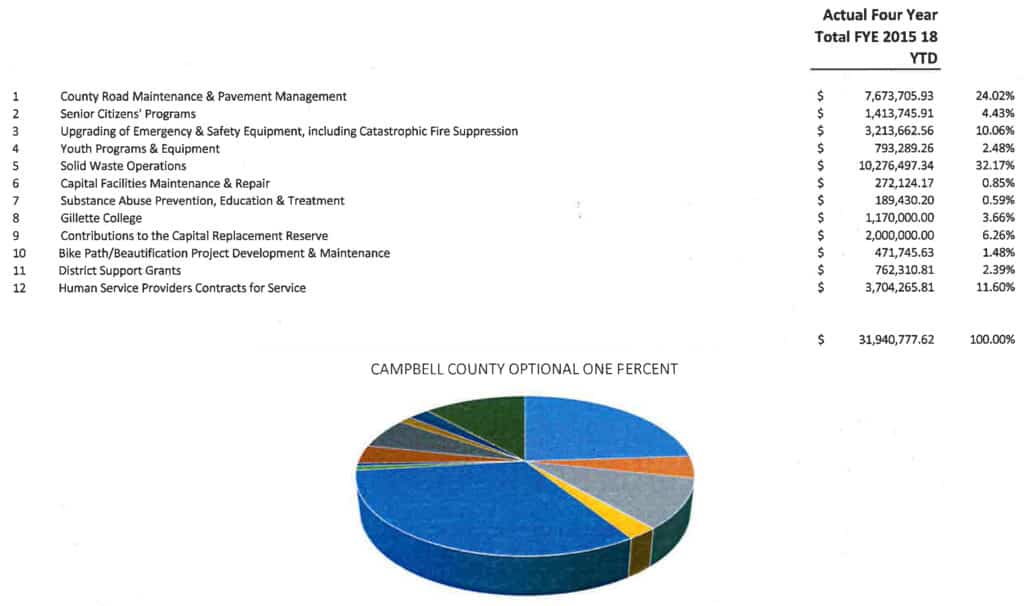 The County’s second largest 1% expenditure is the road maintenance and pavement management system. Currently, the County’s general fund covers nearly $500,000 in dust suppression costs, while 1% funding is generally used for R&B equipment (snow plow equipment such as blades and sanders) and pavement manage. For those who may not know, dust suppression is critical for industry (especially the mines). From an air quality perspective, the DEQ carefully monitors the dust particles in the air (parts per million), and in the event, the air is considered out of attainment (excess dust particulate in the air) the mines could be forced to shut down. Much of the dust particulate matter in our air is a result of heavy oil and gas development traffic on county gravel roads. If the annual 1.75 million (annual average for last four years) in 1% funding for R&B equipment and pavement management went away, and those services/cost had to be absorbed by the general fund, dust suppression efforts could be at risk, which could also mean jobs would be at risk.

These are just two examples, of many. It’s more expensive for citizens without Penny Power, then with it.

Stay Up To Date